There’s a lot written about what organisations should be doing to improve performance, however the reality is your organisation is where it is, not where a book or an article says it is, or needs to be.

Sounds simple and it is. And generally assessing what type of culture prevails in an organisation is pretty simple too. It’s rare for instance (not just our experience either) that the company website promoting an engaging, empowering and innovative culture is not even close to the reality experienced by  everyone working there (if you were given the opportunity to ask them).  But it looks good on the website and that’s the goal anyway, isn’t it?

What does the Board think?

Often the Board will believe what’s said on the website, as after all, it’s they that ultimately approve it.

But do they really know?

Does the board outperform what the research says? What about the leadership in total?

Research like – “Ten fatal flaws that derail leaders” by Jack Zenger and Joseph Folkman, published by HBR in 2009 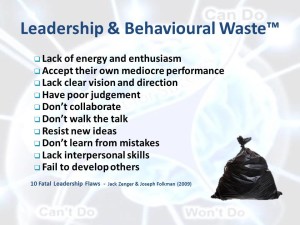 How does all your leadership stack up against this list?

Where Boardrooms will think is something like the following picture. 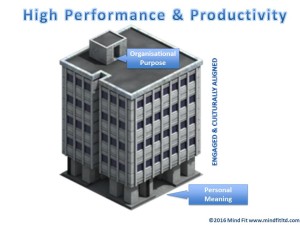 Boards want a successful organisation, that’s high performing, where everyone is engaged in the purpose of the business, culturally aligned, where employees each have personal meaning that is also in line with the organisations purpose… and happy…

and a rock solid building comes to mind where everything within reason is perfect, and stable.

But what about reality?

Reality, however, has a habit of proving us wrong, and that reality is often very different from our beliefs and perceptions.

In most cases, we never really achieve engaged teams or departments that are perfectly aligned with the combined culture. Instead we put up with the differences and rarely address or fix them, believing maybe that the differences are not that ‘big’ or important. (That status quo continues despite knowing an engaged organisation is more productive… and happy). 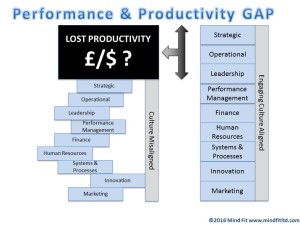 The perfect cultural alignment shifts and the building blocks start to look unstable as departments develop their own cultures. Some leaders, heads or managers are more imposing and influential than others and hence it’s not surprising departments move away from the core culture. If allowed to continue this will create long term disengagement and lower productivity. What we know, as it’s regularly reported is that some 50% of available time is non-productive, a fact most C-suite leaders will tell us when asked.

So perhaps the first question to ask is which picture fits your organisation? The right, or the left? How aligned are each of your leaders, managers, heads and employees? When we hire or promote for a department on the left, from what starting position are we doing it?

How much lost productivity do you have?

The difference between the two buildings is shown in lost value – productivity.

Many will say you can’t measure where the source starts, but we know you can, because it stems from Behavioural Waste™, and there are three forms of this waste ; Personal, Cultural and Systemic.

If you’d like to see what value you’re losing because of Behavioural Waste™ this link will give you better understanding.  http://bit.ly/MindFitFootprint

the biggest business disease that can be reduced or eliminated

but this elephant in the room is believed to be too expensive to fix. But that’s a belief, because you’ve been told it all before and snake oil just doesn’t exist.

The question to ask is  – what if there is a better way and we can fix it, once and for all? What would a truly engaged organisation deliver in value?

As ever you have a choice – there’s a new world available if you look here  http://bit.ly/MindFitFootprint

So does your Culture help the Organisation Succeed? 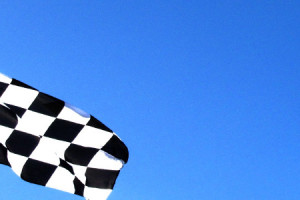 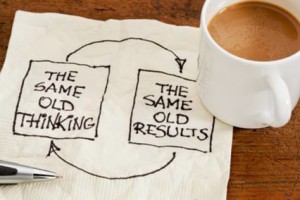 Are you trying to prove Einstein wrong?