Another Myth? It takes 21 days to change a habit

Some people can change even strong habits overnight whereas it can take a lot longer for others break the same habit. It depends on many factors and requires each of us to have a real purpose. Without a real purpose many people find that their New Year’s Resolution is already destined to fail.

However there is a commonly referred to ‘Theory’ that it takes 21 days to change a habit. In fact there are many training courses that are marketed with this ‘fact’ at the core of the programme.

It’s always good to have the science behind what we believe are facts. We think the following is the source to the “21 days to change a habit”. In the preface to his 1960 book ‘Psycho-cybernetics’ Dr Maxwell Maltz, a plastic surgeon turned psychologist wrote:

‘It usually requires a minimum of about 21 days to effect any perceptible change in a mental image. Following plastic surgery it takes about 21 days for the average patient to get used to his new face. When an arm or leg is amputated the “phantom limb” persists for about 21 days. People must live in a new house for about three weeks before it begins to “seem like home”. These, and many other commonly observed phenomena tend to show that it requires a minimum of about 21 days for an old mental image to dissolve and a new one to jell.’

How a leap from phantom limb syndrome to moving house and even further to any change in habit is unclear.  One possibility is that the distinction between the term habituation (which refers to ‘getting used’ to something) and habit formation (which refers to the formation of a response elicited automatically by an associated situation) was perhaps lost in translation.

‘Our self-image and our habits tend to go together. Change one and you will automatically change the other.’ (p108)

Perhaps readers reasoned that, if self-image takes 21 days to change, and self-image changes necessarily lead to changes in habits, then habit formation must take 21 days. Although ‘21 days’ may perhaps apply to adjustment to plastic surgery, it is unfounded as a basis for habit formation.

But that reasoning follows similar to the dogs have leads story.

My cat has a lead when I take her for a walk. All dogs have leads. My cat is a dog….

So, if not 21 days, then, how long does it really take to form a habit? The following is some research but only if you’re interested.

Researchers from Ben Gardner’s Research Department of Behavioural Science and Health at UCL have done a more rigorous and valid study of habit formation (Lally, van Jaarsveld, Potts, & Wardle, 2010). Participants performed a self-chosen health-promoting dietary or activity behaviour (e.g. drinking a glass of water) in response to a once-daily cue (e.g. after breakfast), and gave daily self-reports of how automatic (i.e. habitual) the behaviour felt. Participants were tracked for 84 days. Automaticity typically developed indistinct pattern: initial repetitions of the behaviour led to quite large increases in automaticity, but these increases then reduced in size the more often the behaviour was repeated, until automaticity plateaued. Assumed that the point, at which automaticity is highest, is also the point when the habit has formed, it took, on average, 66 days for the habit to form. (To clarify: that’s March 6th for anyone attempting a New Year’s resolution.)

Interestingly, however, there were quite large differences between individuals in how quickly automaticity reached its peak, although everyone repeated their chosen behaviour daily: for one person it took just 18 days, and another did not get there in the 84 days, but was forecast to do so after as long as 254 days.

There was also variation in how strong the habit became: for some people habit strength peaked below the halfway point of the 42-point strength scale and for others it peaked at the very top. It may be that some behaviours are more suited to habit formation – habit strength for simple behaviours (such as drinking a glass of water) peaked quicker than for more complex behaviours (e.g. doing 50 sit-ups) – or that people differ in how quickly they can form habits, and how strong those habits can become.

If you have a strong enough purpose, you can and will change any habit. How long it takes, depends on what it is and how focused you are.

But one thing for sure – it takes 21 days to change a habit, is a myth. 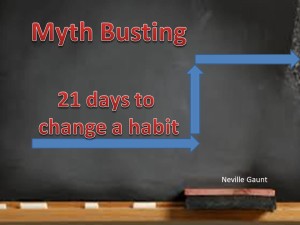 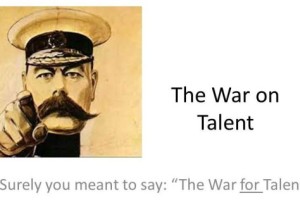 The War on Talent

Are you a passenger in your business?