Has Your Industry a Reality Driven Leadership?

Has Your Industry a Reality Driven Leadership?

As every industry has its uniqueness, to answer this question might be contextually difficult. So let’s look at the question on something that the large majority of working people do – taking part in sport. It’s not rare or unusual that people at work are in some way involved in a sport, either passively or actively. In fact it’s probably over 70% of leaders and managers will either play a sport or be a supporter in one way or another.

If you ask a simple question

“why do you play or get involved…?”

the answers will include “ I like it..”, “gives me a buzz..” , “ spend time with mates..” , “ I get healthy..”, “keeps me sane!”  and lots of very personal interests that are being satisfied. It’s not surprising really as we make a conscious choice to do it, no one forces us and if we do it regularly we can assume we get sufficient enjoyment from it.

Now – do we believe those managing the sport are doing it for us or some other reason? Has my sport got Reality-Driven Leadership driving it? Are they making it better, more exciting, a magnet for young people… or what?

Now any sport that’s growing, bringing in new talent at the top, fulfilling the amateur’s wants and increasing the funnel at the bottom is clearly doing something right even if it’s not perfect. I’m sure you can think of improvements in your own sport if it’s on that track.

But what about other sports that have struggled? How about a game where business is traditionally known to be done?

It is not news to anyone in the golfing world that golf is facing many challenges and while the games interested parties look into fixing the problems, what if the games problems are viewed from a different perspective – one that a Reality Driven Leader would take.

One of the biggest issues the “owners” of golf face is the belief that golf takes too long. Now they haven’t just imagined this – it has come from questionnaires around the world, but as you might know today that questionnaires will give you the answer you want to see, so maybe the tail is wagging the dog?

However, let’s just assume we accept for a moment that game of golf is too long, how has this reality/perception arisen to be even a ‘starter for 10’ problem?

Years ago you would never hear no-one saying that golf takes too long, it was never even mentioned. Now, it is one of the first things that springs to mind. Golf was a part of corporate life and in many cases it was instrumental in securing a position and we all know that lots of business was done on the golf course.

Corporate golf was a ‘perk’ many enjoyed and fun was right at the top of the list. But was an important message being missed? The opportunity for golf to grow and the time spent on the golf course was an ideal time to learn and develop essential skills for sport, business and life.

Of course today, the corporate life is a small part of golf so things have changed, but let’s look at a common tale today of two different golfers.

A tale of two golfers. 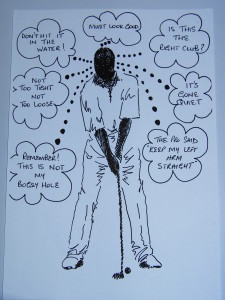 First let’s take a look at golfer number one – Jay. After a stressful week at work, you would think Jay’s  time on the golf course would be an opportunity to relax, you couldn’t be more wrong. But Jay looks forward to playing golf none-the-less. Arriving at the course in a rush and hurrying to the first tee, after a few nervous putts on the putting green, it is time for the first tee shot.

Remembering what happened last week, Jay is focused on avoiding the same scenario again and the out-of-bounds on the right. A last minute look down the fairway and a short, quick backswing the ball curves sharply to the left and finishes in fairway bunker. Unaware of the fact that Jay had avoided the out-of-bounds down the right, our golfer is still not happy with the result.

Already cursing and swearing Jay puts the club aggressively away in the golf bag and stomps down the fairway. Unfortunately what follows is four and a half hours of torment and anguish. Any good results are viewed only with a sense of relief and no learning (or enjoyment?) takes place. In the 19th hole after the game Jay is left wondering why play this ‘stupid’ game and you can guarantee that anyone Jay meets will not be encouraged to want to take up the game. But the same happens next week and the cycle continues.

Equally as busy as Jay during the week at work with the main difference being how much Jules enjoys work and the people working in the team. Jules plays at the same golf course and is often in the group behind Jay.

Jules always looks forward to the weekend game of golf and views it as me-time and an opportunity to develop skills, learn and have some fun with friends. On the putting green Jules follows a now usual routine of making certain to assess the speed of the greens before heading off to the first tee.

Standing on the first tee, Jules is focused at first on what the outcome is wanted, and then a measured practice swing is followed by a polished pre-shot routine. A fluid swing results in a shot that doesn’t finish anywhere near the outcome wanted, but Jules has learnt from the shot. After receiving the usual comments of silence or “bad luck” from playing partners, Jules cleans the club and places it carefully in the golf bag.

Upon leaving the first tee Jules is looking forward to the next four and a half hours on the golf course, sharing stories, with the usual playing partners, enjoying the fresh air and exercise in beautiful natural surroundings and not to forget the opportunities to learn more and have fun.

For one of our two golfers time seems to drag and the 19th hole cannot come soon enough, for the other time would seem to fly. But no one has changed the speed of time. 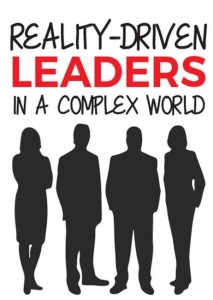 The role of Reality Driven Leadership

There are 5 roles of Reality Driven Leaders:

However, the first, being an Investigator is critical as it without reality you will build a solution doomed to fail.

So let’s ask the question to Jay and Jules – what would make the game better for you? Do you think the answer would be a shorter, quicker game that comes first?

Jules may reflect on the benefits of the game, personal soft-skills like confidence, self-belief and control, the well-being benefits and anything else that is attractive and what would make the experience better. If Jay heard those answers would Jay want to improve personally, enjoy the game more or want the game shorter? If the game was simpler it might help as there are so many rules, even the top pro golfers need help! But simpler should be the driver and that may well lead to being shorter, but will ½ hr really make a difference to the experience?

So as you can see the investigator, one role of the Reality Driven Leader is vital to getting things right and doing the right thing.

A belief that shortening the game of golf is the number one priority, will quickly become fact and then all change is driven by that one belief. But what does Jules and Jay think?

As ever it’s a choice so if this has given you an idea, and you’d like to know more, the place to start is identifying Behavioural Waste™ in your working or social life.  Here’s a free chapter that explores the ideas   http://bit.ly/BWDisease

And the choice is yours.

Has Your Industry Reality Driven Leadership?

What do you think? 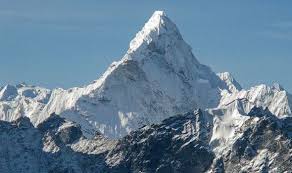 How we can all achieve Peak Performance 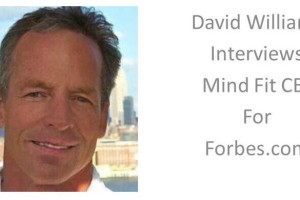